The Southern Expanse is a stretch of land defined by its plateaus and sparse plant life. It's here that the partially nomadic Hurak made their home. The Hurak are the descendants of the doomed civilization to the West, the one destroyed by the Infernals, but their exact relationship to that ancient culture is unclear. Whatever the truth, it is lost now as the Hurak destroyed everything that would have connected them to that fallen empire, including their histories. Now they live simple lives, attempting to avoid the notice of the destructive forces that neighbor them.

The exodus of the survivors, and the Chimera that followed them, forced the Hurak to flee their homes. And though most were focused on the path ahead, some still witnessed a strange change in the invaders as they advanced. Though the resin traps created by the Fury can still be seen far to the east, the signs of Fury activity quickly fell away. Equally unusual, a portion of the chimera, the Leo and the Crocuta, ended their pursuit of the humans, claimed the adobe homes of the Hurak as their own and then promptly went to war with each other.

A long canyon splits this land, and the shallow soil hinders vegetation that must grow deep. 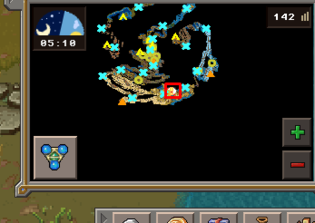 Totem If You Got Em' (Coordinates):