The Bulwark Fen is a new formation upon the Heartland. It was once part of the Escalade Sea, where the rivers fanned out in great deltas before meeting the larger body of water. But when the Keening opened up a massive fissure on the southeast end of the Escalade Sea, the water level dropped dramatically over a short period of time. This left several shoals exposed, which trapped a portion of the water and most of the sediment that continued to flow towards the sea. This turned the area into a stagnant bog with several natural lagoons.

More importantly, the Bulwark Fen masked the movement of the Chimera and the Fury before they launched their devastating attack against Sagila.

Once part of Escalade Sea to the East, it is now a stagnant lagoon. 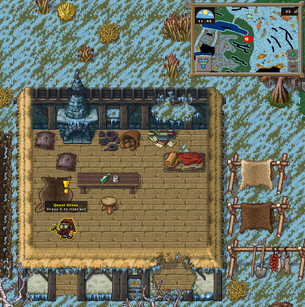 Island Fury is a quest given by the Quest Giver at location [1316,1760]. You can reach this location quickly by teleporting to the top-most Shrine on the overworld map and moving down towards the up-most lake, bottom right. There should be a hut close-by with a Quest Giver.